October 9th, 69-year-old Paul Atkinson tied his sneakers tight and took off to compete the 2021 Eversource Hartford Marathon, his many supporters rallying behind him. With a personal interest in supporting mental health efforts, Paul Atkinson chose to support Mental Health Connecticut (MHC) through his participation in the marathon. 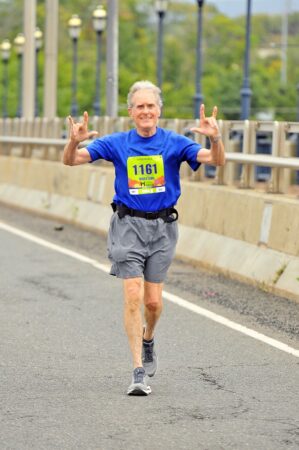 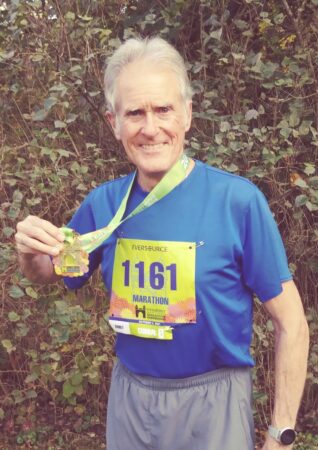 Paul Atkinson after completing in the 2021 Eversource Hartford Marathon in support of MHC.

“Mental health issues have affected my family for at least three generations. Fortunately, God has blessed me with the strength, endurance and drive to participate in these long runs. I am honored to support Mental Health Connecticut in gratitude for the hard work the team has done for my family and for their service to all those in the mental health community.” – Paul Atkinson

Paul’s first marathon was the Hartford Marathon which he ran in 2019. Prior to that, he had been an active runner competing in 5K’s, 10K’s, 5-milers, and occasional half-marathons. He unfortunately never had the time to follow a full-marathon training schedule, but he was afforded more time upon his retirement. For almost 34 years Paul worked full-time with Northwestern Connecticut Community College as an instructional specialist for Deaf and hard-of-hearing students before he retired in June 2019.

In 2020, Paul had planned to do a virtual full Hartford Marathon and signed up to be a part of “Team MHC” for Mental Health Connecticut, but he was devastatingly struck with a tick-borne illness in mid-September. This threw his training schedule way off at a crucial time, but his determination never wavered, and rather than stepping down entirely, he ran the half-marathon instead, and helped support MHC in our fundraising efforts.

This year was Paul’s second full Hartford Marathon and was pleasantly surprised with the results. He ended 6th in his division (65 – 69) and 20 minutes faster than he previously ran in 2019, completing the full marathon in under 4.5 hours. Way to go, Paul!! He said his results have encouraged him to try again next year when he’ll have a shot at first place in the 70 – 74 division.

MHC is grateful to Paul and his supporters for their valiant efforts and determination. Paul has always been a motivated supporter and we encourage you to join us in cheering him on. Use the link below to be directed to Paul’s fundraising page:

Physical activity such as walking, running and jogging cultivate positive whole health and wellness. For information and tips from Mental Health America about the connection between physical activity and its effect on your mood and overall health, click here.