On June 8th, 2020 Mental Health Connecticut (MHC) published The Condition of Being Human, a blog post and official statement from MHC. The statement in its entirety is a reflection of the frustration and pain that many of us have felt and are still feeling in response to the systemic racism, ongoing discrimination, police brutality, and need for urgent change following the brutal death of George Floyd.

Earlier that week I wrote a statement of my own to capture my emotions and reflect on my place in society. As a multiracial woman in America, I’ve dealt with racism, oppression, and hatred my entire life. While still in the womb it was made clear that members of my own family would refuse to meet me because of the color of my skin. Growing up with what the world saw as a “black dad” and “white mom” I was seen and treated as “other.” The name calling, the stares, the outward disgust some would show our family… it was part of how I grew up. I learned to let certain things roll off my back – pretending I was strong enough to ignore it, when it instead was hurting my emotional core.

Choosing your battles was not only a lesson but a way of survival. The first time I was called the n-word to my face, I chose to let it go. When asked repeatedly to check only one box for my ethnicity instead of three, I carefully rebelled when I could and ended up with a school ID that said “Caucasian” when it was too complicated to make a stand. I had numerous conversations with my therapist about generational trauma and barely broke the surface of what would surely be a fascinating psychoanalysis study. Knowing your ancestors were (and in some cases still are) at odds with each other is not the easiest reality to accept.

When Rodney King was brutally beaten in the streets of LA, I was seven years old. I still remember that video of him lying on the ground as 4 police officers kicked and beat him with their batons.

Flash forward to 2012, a young man was visiting relatives in Sanford, FL and on his walk back to their home, 17 year-old Trayvon Martin was shot and killed just 70 yards from the back door of his family’s home. I questioned if I could safely wear a hoodie outdoors again. Out of necessity and a collective outcry for ENOUGH, the Black Lives Matters movement was born.

It was around this time in my life when I started learning more about my ancestors. My African-American roots can be traced from my father (CT) to his father (GA) all the way to Ramses III (Egypt). My grandfather only came to CT because he was chased out, threaten at knife point. Lynching was commonplace in Georgia and sadly the crime is still committed today. My great uncle, Cephus Davis, was lynched in Lumpkin, GA in 1933. Ahmaud Arbery’s death was labeled a lynching in February 2020. There is something to be said for learning about the life and death of complete strangers. Empathy and sympathy don’t cover it when the stories echo in your own family tree.

During my summer of reflection, I took to heart the MHC statement of June 8th. In it, MHC committed to deepen our fight against oppression. “We have the ability to address the injustices that are ingrained in our culture and go beyond the mental health conversation. This strategy will include broadening self-advocacy and supporting our communities across Connecticut in their efforts to turn ideas into action.” I wanted to be a part of this strategy and so I brought an idea of my own to the table. I proposed to the Executive Team of MHC to create an employee-led committee that addresses these injustices. I wanted to first prioritizes this work by starting internally to set the example for the communities we serve by embracing a culture of respect, anti-racism, and equity.

With unanimous approval of the Executive Team, the “Equity, Social Justice & Antiracism (ESJA) Advisory Committee” was created. With an organization-wide commitment to creating environments that support long-term health and wellness, the mission of the ESJA Advisory Committee is to identify and create solution-based recommendations to MHC’s Executive Team to improve MHC’s work culture with a focus on social justice, cultural humility, and equity for staff, program participants, and the communities we serve.

I have the honor to work with our group of 15 dedicated committee members. We meet monthly (virtually) and work between meetings to meet our mission. We are currently creating an educational series for all staff to begin in 2021. I could not be prouder of this committee. Through this work, I am able to continue exploring my ancestral connections and emotional responses to what’s going on in today’s society. Our Committee is coming together to share those experiences and creating safe spaces for others to learn, grow, and contribute in meaningful ways. Creating this advisory committee goes beyond personal healing, it’s community healing.

In June of 2020, I shared a personal statement to social media that read: “I’m angry. I’m heartbroken. I’m mourning the loss of people I’ve never met. I’m frustrated at the world that’s stood by and accepted the racism, violence, brutality, and injustice as “normal.” I’m sick to my stomach to see those who attempt to capitalize and profit for their own selfish desires on the backs of the dead. I’m ashamed at the state of our nation. Most of all, I’m tired.”

Since starting the ESJA Advisory Committee, I still honor these emotions, but I can now say that I’m motivated. With the support of MHC’s Executive Team and the fellowship I’ve found within this committee, I’ve gotten my second wind and I’m ready to push forward toward a brighter future. 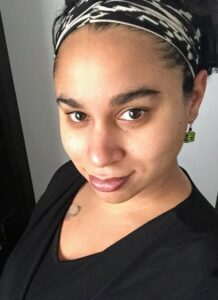 Jacquilyn A. Davis is the Marketing and Development Coordinator and Creator and Facilitator of the Equity, Social Justice & Antiracism Advisory Committee of Mental Health Connecticut. Jacquilyn has over a decade of experience in nonprofit marketing, communication, and graphic/web design in addition to supporting high-level executives at various organizations. With the majority of her career spent with mental health nonprofit agencies, Jacquilyn has managed the websites, publications, public image, and overall marketing for multiple nonprofits. Her educational background in television broadcasting provided her a solid base for the marketing and communication training she’s received over the years in addition to the onsite experience she’s received with the American Academy for Psychoanalysis and Dynamic Psychiatry, the American Association for Emergency Psychiatry, and Mental Health Connecticut.

Click here to return to MHC’s 2020 Year in Review.