Last week, President Obama signed the 21st Century Cures Act (H.R. 34) into law, signaling the most comprehensive mental health reform in more than fifty years. This was only possible because of your continued advocacy efforts – the Members of Congress even said so. 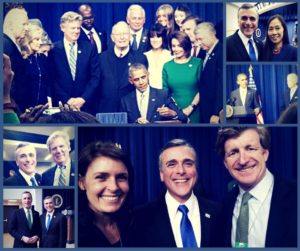 In July, you ensured that the Helping Families in Mental Health Crisis Act of 2015 (H.R. 2646) passed the House of Representatives, and in November, you encouraged the Senate to pass the Mental Health Reform Act of 2016 (S. 2680). Because of your efforts, provisions from these two bills were included in the final version of the 21st Century Cures Act. This legislation will elevate mental health in the federal government, provide grants for early intervention and prevention, and expand the behavioral health workforce, including peer support specialists.

There are still challenges that await us in 2017 and beyond. But for now, let’s celebrate. Advocates for mental health have scored a major victory. Thanks to you, and the thousands of mental health advocates like you who contacted their representatives, mental health reform has passed.

On behalf of all of us at MHA, thank you. We couldn’t have done this without you and we look forward to working with you to build on this success.