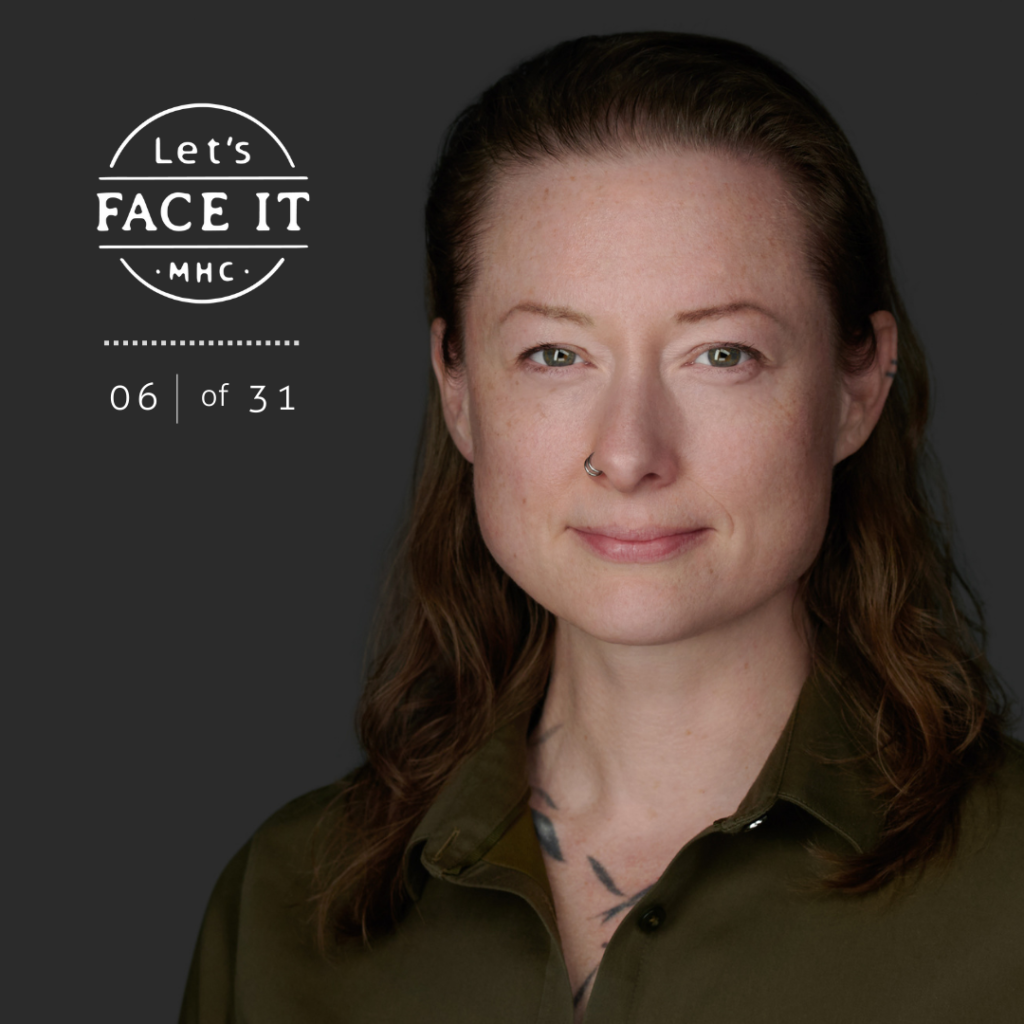 Chion Wolf is used to talking to and about people. For years, she produced and hosted The Mouth-Off, a live storytelling event at the Mark Twain House & Museum in Hartford, and a live advice show at Sea Tea Improv‘s underground comedy theater, called Asking for a Friend with Chion Wolf. Now, as host of Connecticut Public’s Audacious with Chion Wolf, she has conversations weekly with everyday people about their life experiences. It’s a show that can be funny and sad, easy and difficult—sometimes all in the same show—depending on the topic at hand.

But talking about herself? Sharing her deepest fears and worries? Now that’s a different story.

Wolf’s journey into learning how to open up to others had its beginning in college when she first suffered what she calls “circumstantial depression.” She ultimately dropped out of college and became somewhat happier. “I didn’t have anyone to talk to about it beyond immediate family and friends,” she says. “I thought talking about sadness wasn’t an option. So I wrote songs about it, but I noticed the more I played those songs, the sadder I became.”

Fast forward to Wolf’s recent divorce, in which Wolf discovered months into the break-up that her now ex-wife had been having an affair with their nextdoor neighbor. “The divorce was really painful but to find out a darker side was just hellish,” she says. “Having to reprocess the divorce with new information was an entirely new ballgame.”

Wolf soon realized she needed to reach out in ways she’d never really done before about her own life. She needed to break her own stigma around asking for help. “I’ve grown into being the kind of person who talks openly about difficult things. That’s my entire radio show,” she says. “As I began to process this new information and painful experience, it felt like medicine to me to talk about it openly—not only to friends but on social media.”

The results were immediate, mind-blowing and enormously helpful, she says. “Being able to talk about this hard stuff in a public way has been healing,” Wolf says, adding that it has also changed how she now reaches out to others who may be struggling. “It has been eye opening. Before this when I saw someone struggling, I would think my text or call wouldn’t do much. But now that I’ve asked for help and been on the receiving end, I know my phone call and text and love will add up to something for them and be a small part of their healing for them. It’s been life changing.”

“When I first posted about the divorce,” she continues, “I said this is a dark time with me and I said please sit for me, walk with me, cry with me. If I didn’t ask for help, my life felt like it was on the line. This was no time to be bashful.”

“People don’t talk about divorce much, let alone infidelity and betrayal,” Wolf adds. “When we don’t talk about these very real and common experiences, then everybody feels alone. We get sucked into our negative vortexes.”

Wolf hopes sharing her story of asking for help will enable others to stop self-stigmatizing reaching out for assistance when they’re in need. It’s important, she says, to ask for help explicitly. “You’re the only one who knows what kind of help you need. Even if there’s just one little clue you can give people. Let your community surprise you and then when that community comes with all the unique ways they have to show love and support, keep saying yes. You have some agency especially when you feel you don’t.”

Making this choice, she says, is that proverbial gift that keeps on giving. “When the next big challenge comes, you can look back at this time and be surprised at the love that’s there for you. You can also look at the way you empower yourself. When that next hard thing happens, you might have a slightly larger toolbox.”